It reports that 313 aid workers were victims of major attacks in 2017. This includes 154 aid workers employed by national NGOs and national Red Cross and Red Crescent societies, 98 aid workers in the service of international NGOs, and 48 personnel of the United Nations.

Aid agencies - through their personnel - provide essential and often lifesaving assistance to people in need all over the world. This includes emergency relief after man made or natural disasters, as well as medical assistance to victims of epidemics, or those wounded in conflict.

The aid industry has grown considerably in recent years. As a result, the number of aid workers in the field has also risen. Recent figures place the number of international NGO personnel at around 450,000. Unfortunately, violence against aid workers isn’t new – it’s been a pressing issue in the humanitarian community for years. This is especially the case in high risk contexts such as Syria, Afghanistan, South Sudan and the Central African Republic.

To deal with this, many aid agencies have put measures in place to address staff security. They have, for example, hired security advisers, conducted risk analyses, developed security and contingency plans, and carried out staff tracking procedures.

But the available information suggests that international aid agencies are investing more in security than national NGOS and the local operations of the Red Cross and Red Crescent societies.

This is worrying, especially because the upsurge in violence against local aid agencies comes at a time when the debate on the localisation of humanitarian aid is gaining momentum. Many are suggesting that the bulk of aid work should be localised.

In fact, the debate was front and centre at the World Humanitarian Summit held in Turkey two years ago. The summit concluded that local actors should be at the centre of humanitarian responses because they are best equipped to ensure adequate responses.

In any event, local aid agencies, including national NGOs, and national Red Cross and Red Crescent societies, are more often than not at the front lines of humanitarian action. This makes those who work for them the most vulnerable in the aid agency fraternity. Yet they don’t receive the same support in terms of funding and security when compared to their counterparts in international aid agencies. This needs to change.

Humanitarian challenges are immense across the globe. To assist those in need aid workers often work in complex and even hostile contexts. Some of the most dangerous locations for aid workers in Africa include South Sudan, the Central African Republic, Democratic Republic of Congo, Somalia, Mali, Sudan and Nigeria.

Threats to aid worker security in these places are multifaceted. They include crime, armed conflict, acts of violent extremism, and health related threats like epidemics and illnesses as well as floods and landslides.

Despite the dangers, aid agencies continue their work even in the most dangerous settings. This distinguishes aid agencies from businesses. Businesses often steer clear of places where security risks are high, such as the so-called frontier markets, which are up-and-coming economies that tend to be smaller and less developed than emerging markets. 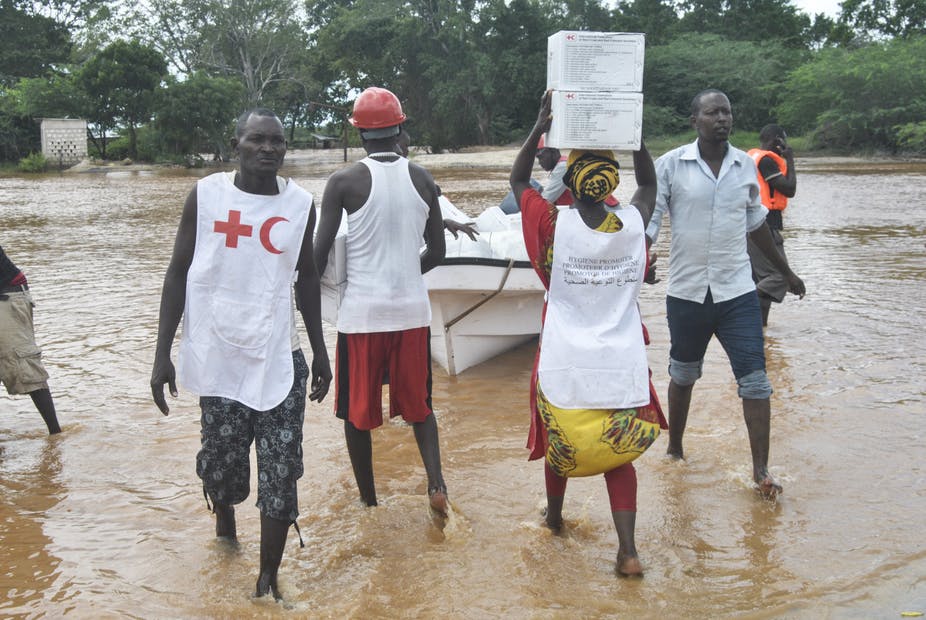 Taking risks isn’t new for aid agencies. They are used to working in complex and challenging situations. And both local and foreign aid workers face threats to their security when they work in hardship areas. As employers, aid agencies have come to realise that they have to ensure the wellbeing of the people who work for them. If their security isn’t a priority they can’t be expected to be committed and productive.

Over the years many have come to acknowledge the value of security management. This is true in terms of protecting personnel as well as ensuring business continuation. Any harm done to aid agency personnel is likely affect an agency’s ability to continue its business.

On some occasions, serious security incidents have forced aid agencies to adopt risk averse attitudes. This has sometimes led to programmes being halted, or in extreme cases workers being withdrawn from the field. For example, earlier this year the International Committee of the Red Cross reduced its staff presence in Yemen. This affected the agency’s overall ability to fully continue its humanitarian activities.

There’s widespread recognition that no aid worker should fall victim to crime, violence, or even illness as a result of their work. Equally, the concept of localisation of aid work, and the wellbeing of national aid agency personnel is vital. The security challenges faced by local aid agencies need to be urgently addressed. Issues such as security awareness, capacity to protect personnel, and funding must be resolved. In particular, the protection of local aid workers needs to be dealt with as a matter of topmost priority.