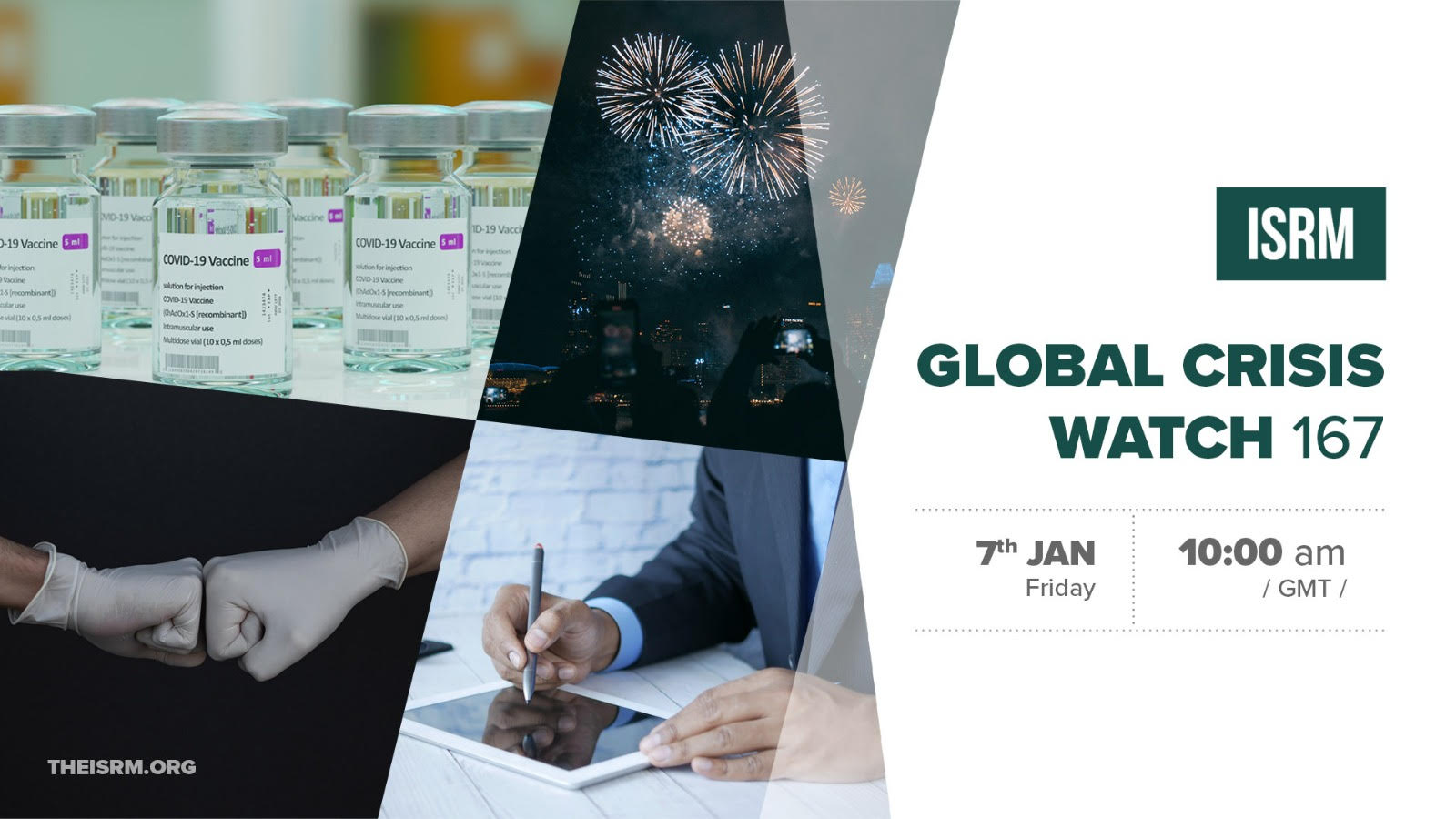 Global Crisis Watch 167 …The Most Since The Pandemic Began

Everybody working in crisis and risk management is probably still trying to figure out whether or not it is indeed a Happy New Year. While we also wish everyone a happy, successful, and healthy 2022, it is not as easy when it comes to our profession. Do we consider waking up on January 1st to a turbulent world as a happy start into the new year or is there some happiness in the fact, that there will be no shortage of work in 2022?

Consider the first week of 2022. The storm on the Capitol will have its first anniversary, an escalation of the war between Russia and Ukraine is still considered a likely outcome, despite talks between the US and Russia scheduled for next week, North Korea has tested yet another rocket, Doomsday glacier Thwaites has made its way back into the news cycle, nuclear power and natural gas could soon be considered green energy in Europe and exploding gas prices have caused widespread protests and a political crisis in Kazakhstan. And on top of all that, there is still the pandemic.

One phrase that could be read over and over again has been “…the most since the pandemic began”. As Western nations experience the Omicron wave, numbers have skyrocketed in ways they have not before. The US reported 1 million daily new infections, France 300K, and the UK 220K. Quarantine time has been cut to keep critical infrastructure from collapsing and governments have made it their daily mantra to urge people to get vaccinated. Despite more and more people testing positive for Covid, we are far away from the bleak winter months of 2021, where fatigue was at its highest and mental health at its lowest point for the vast majority of people. Jumping to 2022, Omicron boils down to “living with Covid” for those who have been fully vaccinated. Bars, restaurants and shops are open in the majority of countries and while we are still far away from reaching pre-pandemic levels of social life, Covid is being managed to the point where life feels as normal as it can during a pandemic. In this regard, Omicron is a blessing in disguise. Even though it is highly contagious, it is less dangerous than Delta, which shows in the stable number of hospitalizations despite exponential growth of case numbers. Several journalists have called omicron the gateway variant into an endemic and there have been articles that not only look back on 2021 but are looking back on the pandemic. So, all in all, that sounds a lot like good news. Right?

Unfortunately, it is not. For one, the Coronavirus will continue to mutate and there might still be variants that are as contagious but far more dangerous than Omicron and could cause the collapse of critical infrastructure everybody is trying to prevent currently. Second, a growing number of people have started to express vaccination fatigue. After receiving two shots, they feel they have done their civic duty and think getting more is just overkill. While science disagrees, this could also turn into a larger problem as protection against Covid declines over time and would leave those vulnerable again who believe that they have done enough. Finally, with more freedoms granted to those fully vaccinated, the rift between them and anti-vaxxers will continue to grow and will radicalize the latter group further. It does not help either that President Macron announced that he will continue to make the life of the unvaccinated as uncomfortable as possible to get them take up the vaccine. While his approach might be more of an outlier, the generally growing pressure to get vaccinated plays right into the hand of anti-vaxxers who have already internalized the narrative of government oppression and impending dictatorship. The resulting and growing threats and violence against the press, police and government officials have just made one thing clear: the danger from radicalised anti-vaxxers is the most since the pandemic began.