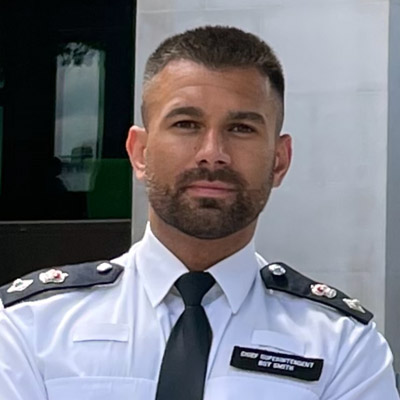 He was personally selected to lead the Deputy Commissioner’s Delivery Group (DCDG), a team commissioned by the Commissioner to deliver on the Mayor’s Action Plan for race and inclusion, working to improve trust and confidence amongst London’s Black, Asian & Multiple Ethnic Heritage communities.

Prior to his transition to the DCDG, Roy was the BCU Commander for North West London covering the London Boroughs of Brent, Barnet and Harrow, during the COVID-19 pandemic. He was accountable for the delivery of policing, including local policing, emergency response, criminal investigations, public protection & partnership. Roy has also held roles including Head of Operations for a specialist department within Counter Terrorism & Specialist Operations.

He is the Met’s lead for Public & Personal Safety (including police use of force) and oversees London-wide policy on officer safety, equipment, tactics & training.

He is an accredited strategic firearms commander, strategic CBRNE commander, public order gold commander and has completed the UK multi-agency gold incident command course. He has commanded a range of public order incidents across London and was the first senior officer on scene at the London Bridge terror attack for which he was awarded a Royal Humane Society Bronze medal in 2021.

Starting his career in Central London, Roy was responsible for delivering a range of business crime initiatives and oversaw the development of the first Business Crime Partnership in London. He project-managed a multi-agency regeneration project making improvements to the built environment and public realm leading to substantial improvements in public confidence and satisfaction as well as a reduction in crime and disorder.

Leaving to run a proactive team in West London and having been deployed as a Public Order Commander during the August riots of 2011, Roy then became head of the new MPS Business Crime Unit, providing the Met’s first-of-its-kind team of officers dedicated to business crime, partnership and crime prevention across London. This included senior-level stakeholder engagement with the business community and partner agencies as well as both local and national government.

He was promoted in 2013 to Chief Inspector and posted to Lambeth borough based at Brixton police station, described by HMIC as “the most challenging policing environment in Western Europe”. There he was responsible for neighbourhood policing and counter terrorism. He left Lambeth on promotion to Superintendent in October 2016, moving to become the OCU Commander for the newly formed Continuous Policing Improvement Command.

He led the development of the National Business Crime Centre, a Home Office funded initiative to improve liaison and co-operation between the police and private sector. In addition he has supported the Met’s Police and Security (PaS) project, promoting intelligence & information sharing with the private security industry. He was the senior sponsor for a joint MPS and US Homeland Security Initiative – ‘The Citizens Academy’.

Selected in 2010 to attend the Bramshill Police College as part of the national High Potential Development Scheme, he has undertaken a post-graduate diploma in police leadership at Warwick Business School. Roy also represents the MPS as an associate director on the advisory board for the Safer London Business Partnership, is a member of the executive board for the Cross-Sector Safety & Security Communications hub (CSSC), is a member of the Security Institute and a member of the Global Advisory Council for the Institute of Strategic Risk Management of which he is a Fellow.